This was my second year at this match, and my first time here as a regular competitor rather than a volunteer, so it was interesting to see the new changes.

Overall, stages were shorter and simpler than last year. Not working the match allowed me to check out vendors and shoot new guns for free (including the full auto pictured above) which was awesome. The biggest change was the new idea of “open squadding.” Instead of a group going from one stage to the next together, in order, you could individually go to any stage at any time, so if there is a long wait at one stage you can bypass it and come back to it later. It worked well, as there was only one stage that I had to wait a significant time on.

Going through the stages in the order I shot them, numbers based on my memory.

Stage 3- Start in this box:

Run to the table, pick up your rifle, and engage 6 steel targets with one shot each. Then run to the next table: 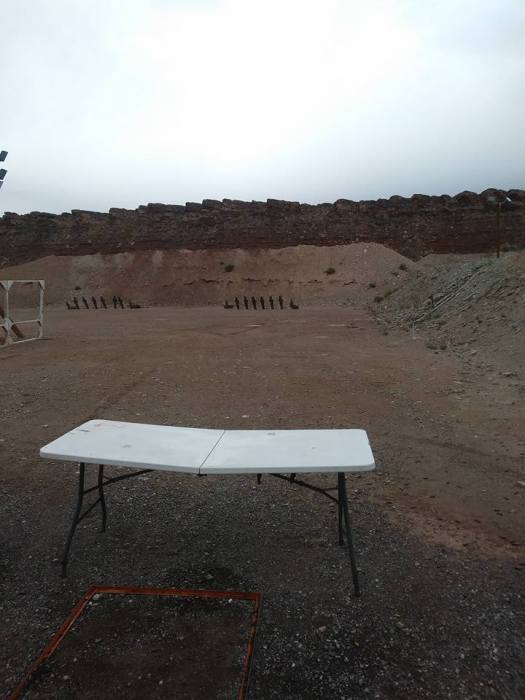 And shoot 6 more targets. Left handed shooters go to the opposite table first, to make it easier to keep the muzzle downrange when running between the two.

Stage 4- Shoot paper targets from colored planks. You must be completely on the plank when you shoot, and you shoot the targets color-coded to the plank you are on. 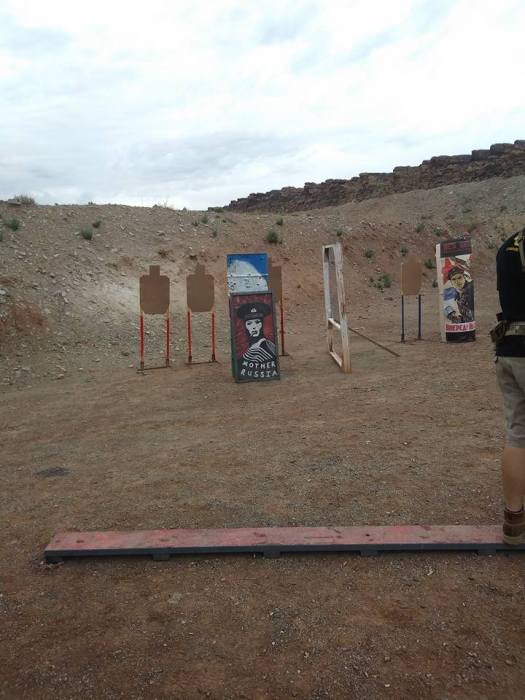 You start seated at a press, compress a 7.62 case to shorter than a 9mm case, pull a cord to activate a moving target, then grab your rifle and engage all the targets through the windows. You have four 10-round magazines that are located around the shoothouse.

I did not get good photos of the inside of the shoot house, but here are the photos I have to either side of it.

Stage 6: You start with the rifle in one hand and this sickle in the other:

At the start beep, you stab the fascist invader with the sickle:

The cord attached to the sickle activates a moving target, then you shoot and move around the barricades to engage all targets.

I noticed on this stage that many shooters were considering the sickle as just an activation switch, which takes a little of the fun out of it. If the idea is stabbing the enemy before you start shooting, it is so much more fun to do it in character.

As I was leaving, I heard the next shooter behind me also start with a battle cry.

Stage 7- Crawl through the tunnel with an AK mag with one round in it, fire one round through the stage gun, then pick up your gun, shoot paper targets on either side of you, then go into the tank and shoot the rest of the targets through the ports. (A bit of explanation: This was originally intended to have a bolt-action as the stage gun, which would have made more sense than shooting their AK and then your AK. The bolt action they intended to use had a mechanical failure, so they substituted a basic AK to keep going.) 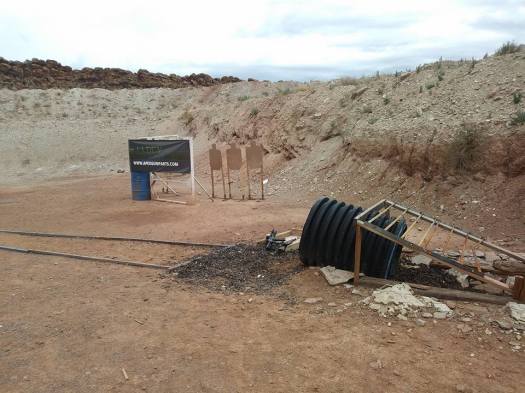 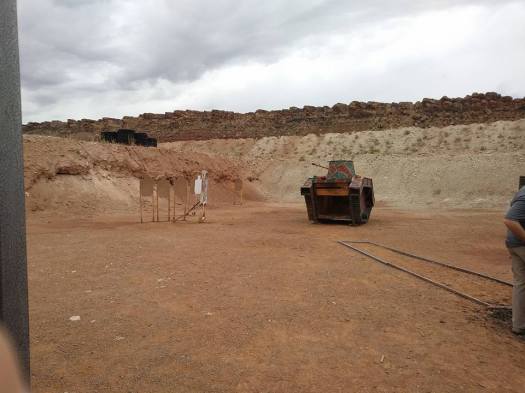 This was one of a couple stages where I decided to do things that made it more fun for me, but that likely hurt my score. I engaged all the targets that I could from the tank, even though I could have shot them from outside it, just because 1) the shooting angles made it more interesting for me and 2) it’s a tank, of course I want to play in it. 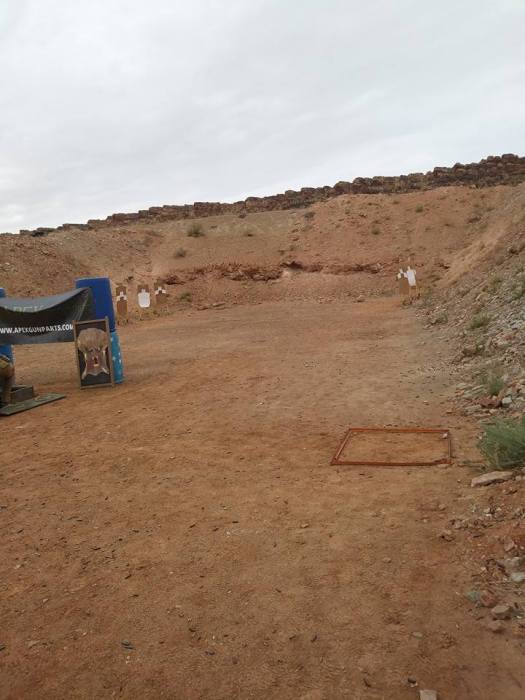 I learned a few things on this stage. There are good stripper clips and garbage stripper clips. The ones I had were garbage. A cartridge got stuck on both of the ones I used, and I would have been faster loading from loose. I then got flustered, forgot to shoot one of the targets, and told the RO that it wasn’t a miss, I didn’t shoot at it (which is a stiffer penalty). Make sure you test your gear before you need it, and keep your head on straight when things start to go wrong. 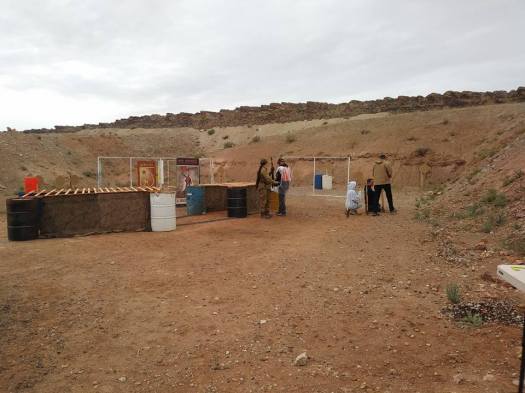 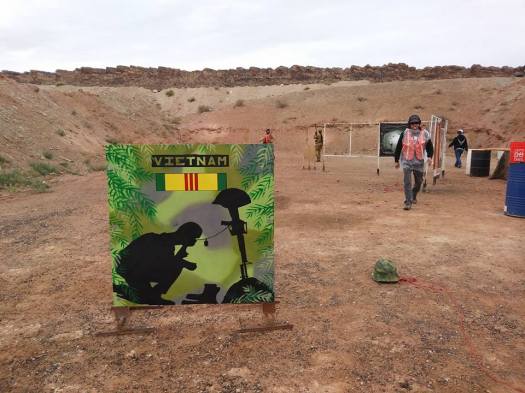 Your rifle starts in the middle of a tunnel covered by wooden slats. You pick up a helmet that triggers a “mortar” boobytrap, go into the tunnel, pick up your rifle, shoot 2 targets, get the rest of the way through the tunnel, stand up and shoot 4 targets, then crawl through a second tunnel, hit an activator plate, and shoot 2 static targets and one moving target. There is a penalty if you displace any of the slats covering the tunnel, so you have to keep your head down. (A friend’s 13-year-old son shot the match, and he smoked everyone on this stage.) 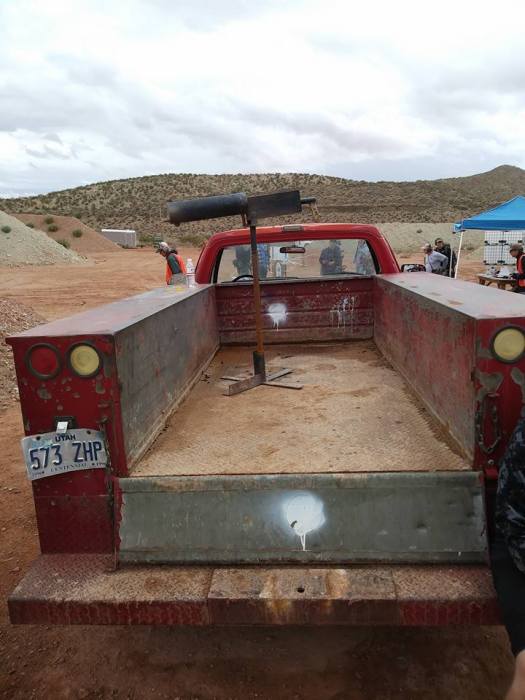 You start manning the machine gun in the back of a pickup truck, rifle on the side toolbox. At the start beep, you grab your rifle and shoot two steel targets:

Then jump out of the truck, run to the shooting box, and shoot the paper targets around or under the barricades. The area painted yellow was specifically noted as a place you could shoot under.

When the RO asked if I understood what I needed to do, I said yes, but that I was going to shoot it differently than most had been doing it. He paused for a moment. “Am I going to be happy with how you shoot it?”

“Umm, you will have no reason to be scared?”

“Okay. I am going to stand behind the truck.”

Again, I did things that hurt my score by a few seconds to make this more interesting. You could shoot all the paper from as close as possible, and you could get a clear shot at everything without having to shoot rollover prone under the barricade, but I shot the far targets as soon as I was in the shooting box, shot under the wall, and I think I re-shot some of them that could be engaged from more than one location. (That last one is something I do whenever I am unsure, as it is better to waste 2 more rounds than to leave a target untouched because you forgot what was what.)

My run on this stage went really well, and was probably my favorite stage of the match.

You start by firing a mortar (dropping a bar with a blank cartridge attached into a tube) then crawling through a section of pipe to the table where your rifle is.

Every good match has that one stage where you experience a total dumpster fire. This stage was mine. I had a lot of trouble hitting the distant targets and timed out. I have been told that AK sights have more trouble in varying light conditions than other sights, and I remember thinking that the light conditions when I shot it made my sights look weird. I can’t think of anything else to explain it.

Practice with AK sights more, and I think re-blacking the sights before next year would be a good move.

It had been raining on and off for much of the day, but about this time a storm blew in and most of us called it a day. Get to the hotel, get the gear dried out and lubricated.

Come back in the morning to shoot the one stage I had bypassed.

Climb over the rooftop prop to the barricade, use it as a rest, shoot three long-range torso targets:

Move to the higher barricade, shoot them again: 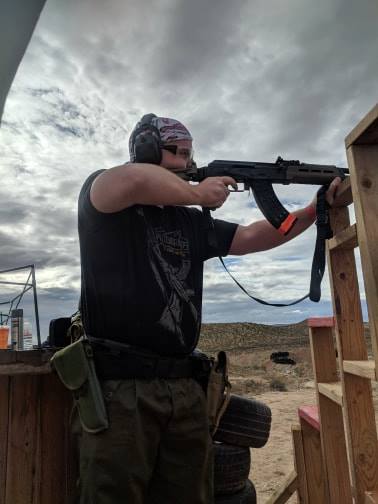 Then climb on top of the roof prop and shoot closer round steel targets:

I had a good run here and felt that I somewhat redeemed myself from failing on the long range the first day. One of the ROs at this stage let us try XTech magazines to get our opinions of them (and got the above photos of me using it). I liked it enough to pick up one of the Red Oktober souvenir mags before I left.

While this is a rifle-only match, they had a 9x18mm pistol “game” in one of the bays. 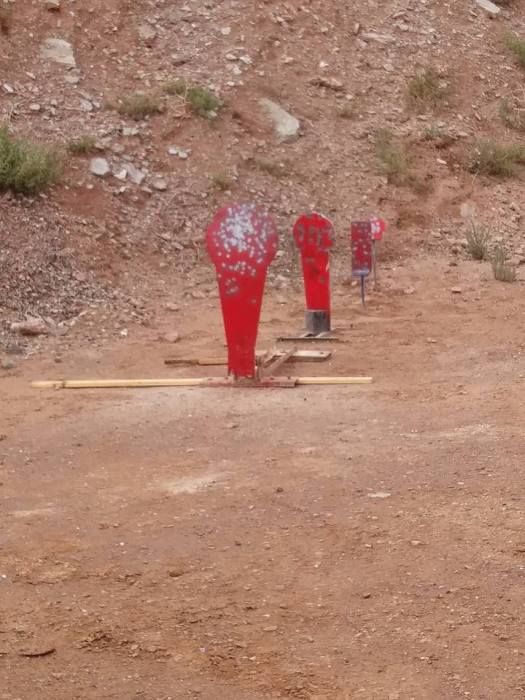 I did not do particularly well at it, but it was fun. The first target (nicknamed “Big Ivan”) took 3-4 quick hits to knock down, and I didn’t slow down enough to make my hits on the smaller targets.

I put off writing this for longer than I intended to, so I may have forgotten small details of some of the stages, but this gives you a good idea of what they had this year. I had a great time and can’t wait to see what they do with it next year.