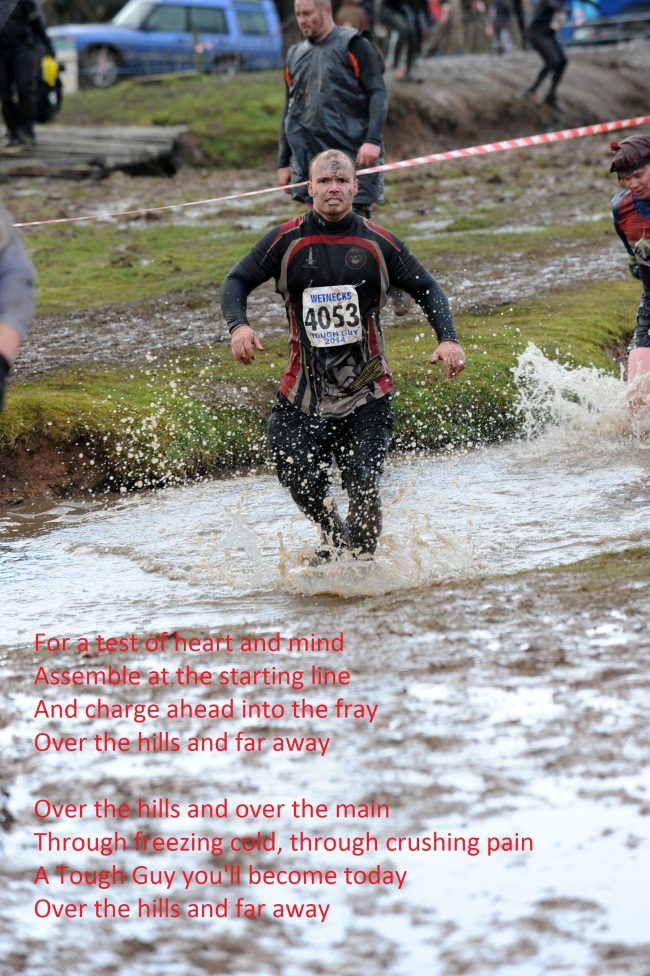 A teammate posted a Youtube video about an English race called Tough Guy in January of 2013. That was honestly all I knew of the race, but I immediately knew I wanted to go after it. I found out about it too late to attempt 2013, but signed up for 2014 as soon as registration opened. I figured with a year to train and sort out finances, anything can be done.

Travel getting to Wolverhampton was an adventure in itself, but another story for another time. I was able to meet my teammate, get to the race venue, and find everything that I needed. 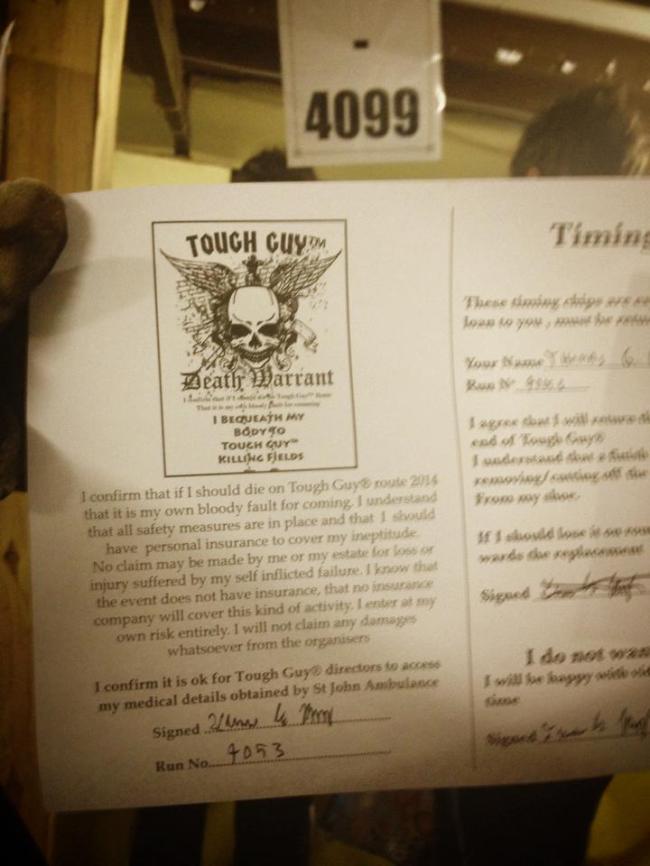 We found the gear storage/changing area, chatted with some of our fellow competitors from around the world, and when we saw the herd moving followed it to the starting line.

I will always love the wry humor among athletes at the starting line. You can see the front of the pack getting worked up and sent off, but through the crowd you often cannot see where you will be going. The conversation drifted to, “I was just following the crowd. Is this where we start from, are are we accidental spectators? By the way, crap its cold…”

The leaders went off, accompanied by WWI reenactors on horseback, and the crowd around me started moving, up the face of a steep hill and then sliding down the sheer mud face of the opposite side, and we were off.

It is always interesting to see what you pick up on when you enter a different culture. The first thing that hit me was that the shouts of encouragement were different. Rather than the “ARROOOO” or “HOOOAAAHHH” you hear at stateside races, what I heard here was a chant of “HOO HOO HOO HOO” or a call and response of “Ooggy ooggy ooggy!” “OY OY OY!!”

The first 3K of the 15K course was mainly muddy trail running, a few waist- or shoulder-high log barriers to go over, but nothing too challenging. We hit the first aide station at 3k, where the 12K option would start. The aide station had run out of cups. The only time I have ever been handed a 4-gallon carboy and instructed to drink from it.

More trail running through the slickest mud I have ever seen. Bear-crawling up hills under nets and sliding uncontrollably down the muddy slope down to the beginning. (Insanely fun, worth the price of admission by itself.)

We came to a bottleneck on the course. A course official, painted in death-face (I would later realize he was a medic) directed us to form up to the right of the trail to open up the left. I didn’t realize until the crowd started cheering that the backup was due to removing an injured racer from the course on a stretcher. I was impressed with the encouragement the crowd showed him, much warmer response than I would expect to see back home.

Up and down steep wooded hills, scooting and crab-walking enough to joke that the race should have been called “Hard Ass”. I was having fun, but was about to think that the race was over-sold.

Then we hit the mud pits.

A single mud trench that you must navigate back-and forth roughly 20 times. Trench is about my height in depth with waist-deep mud and water.

The most visible obstacles are the huge log structures that you must climb up, navigate a cargo net, balance beam or rope traverse, and climb back down. Not technically difficult, but gritty and, for me, a lot of fun. 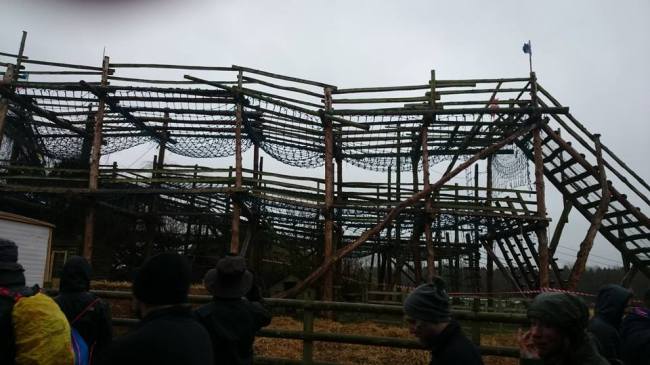 Then we came to the heavy-duty water obstacles. 500 yards at a time, through chest-deep water, just a few degrees above freezing. 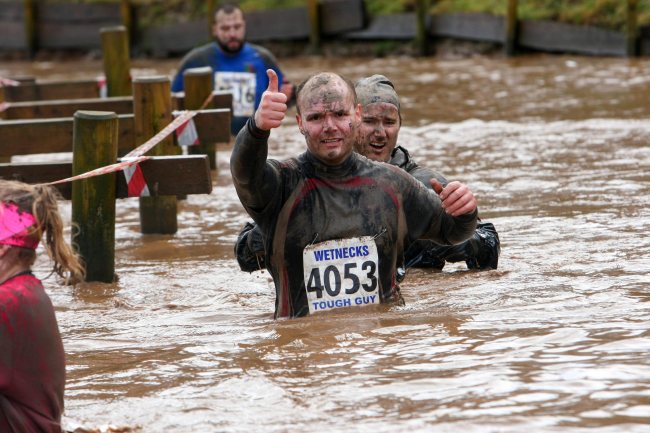 I also found the obstacle of crossing the water, crawling through a stack of tires, trying to exit without falling into the water completely, and then crossing the rest to be difficult. Most of the spaces I have had to crawl through have been much wider and not nearly as uncomfortable. 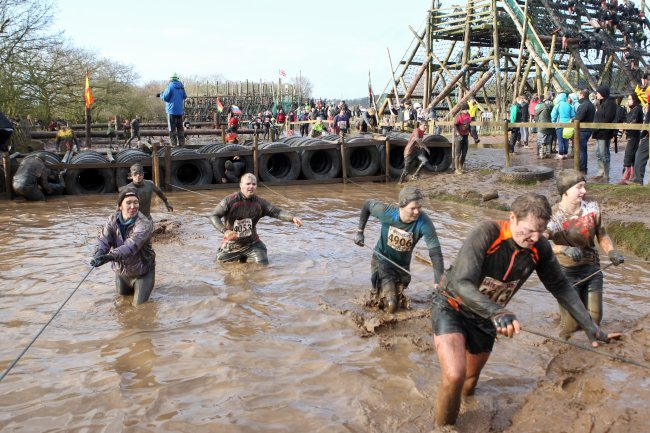 But by far the worst was this thing: 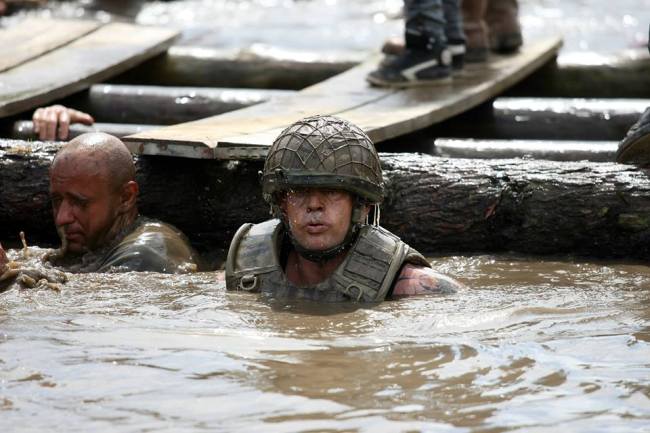 Wade 50 yards through 34 degree water, go under 4 or 5 logs in succession, and then swim 20 yards to the shore. This was undoubtedly the low point of my race.

About the second log, by body started to rebel. My calves locked up and refused to work. I usually suffer in silence, often even with a smile and a weak joke. This affected me enough that I broke down screaming.

When I finally made it to she shore, it took 3 separate attempts and much swearing just to be able to get to my feet. It is very humbling and more than a little embarrassing to have to work that hard just to stand up. One of the photographers gave me a word of encouragement, but I can’t for the life of me remember what he said. I think my brain function was going downhill due to the cold.

I kept stumbling forward, hoping the exertion would warm me up, and just as I was starting to regain full function I would have to go in the water again.

I tried hard to stay out of the water on my last rope traverse, but with several people on the ropes it was too unstable. I was able to step off the lower rope and hand-over hand it the rest of the way with my lower body in the water. 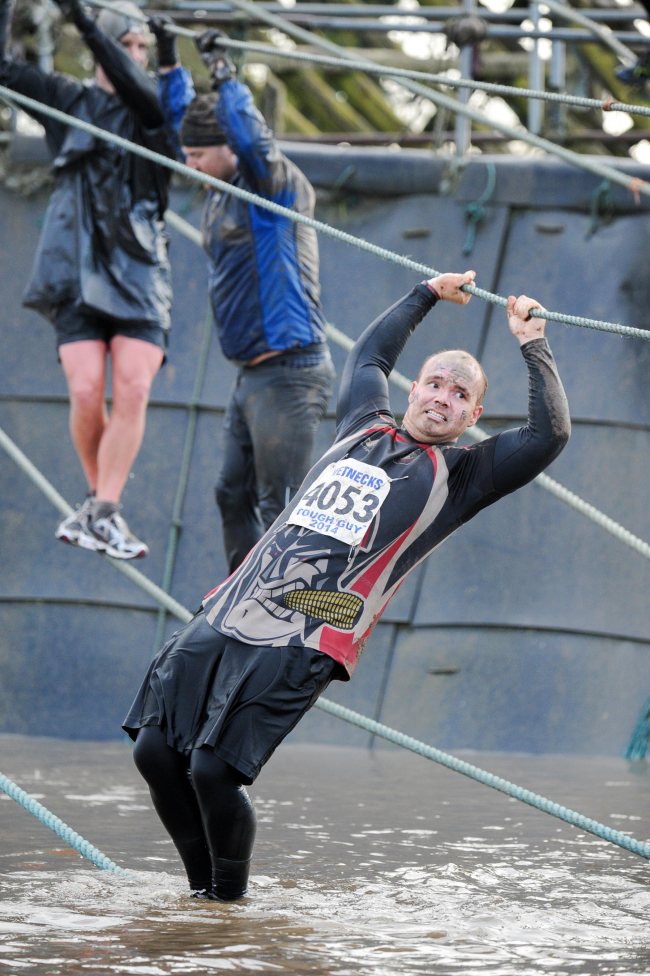 There comes a point where your thinking and your memories get fuzzy, but you know you must be almost done and you keep pushing on. Up the hill, across the water, down a slide with hanging electrified wires.

My one teammate who attended this race with me said she was disappointed that there was no last run of glory at the finish line, as there is at Spartan Race, but just a walk down the hill to people who will cut off your timing chip and give you your finisher’s medal. The low-key finish suited me just fine. None of us could manage more than a quick hobble at that point anyway.

The cold really and truly set in after the finish line. They gave me a cup of hot chocolate, but I was shaking so hard that I spilled most of it before I could drink it. Got toweled off and changed into dry clothes and got back to the hotel for a hot shower, and things got better.

I allowed myself one of my very few cocky Facebook posts at the conclusion of this race. I posted the below photo of my epic rifle-brass finisher’s medal with the caption:

“As I walk through the valley, having signed my death warrant, I have no fear.
For I am the baddest mofo in the valley.” 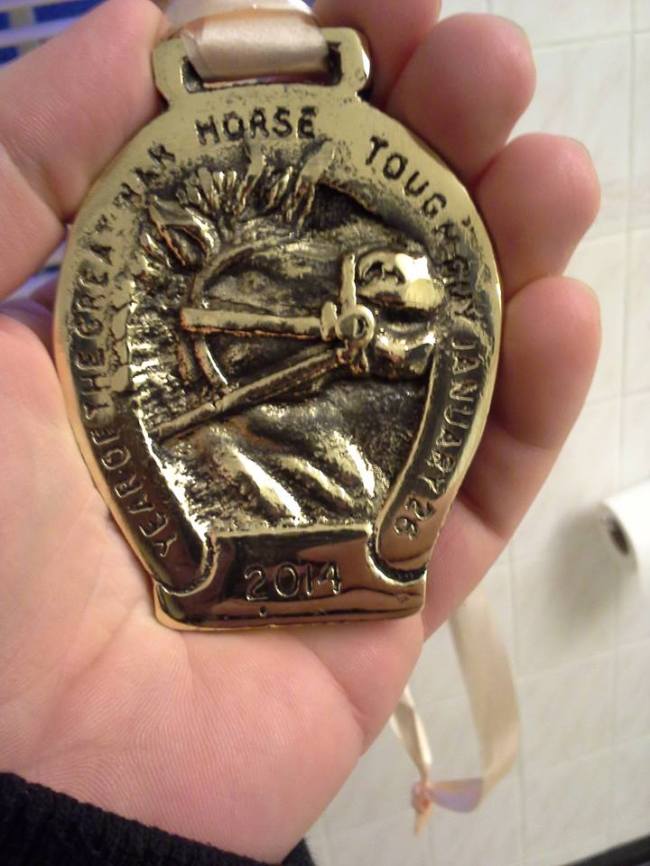 This race was an epic challenge, not so much of speed or strength, but of force of will and the ability to keep stumbling forward, even if one step at a time is all you’ve got left. 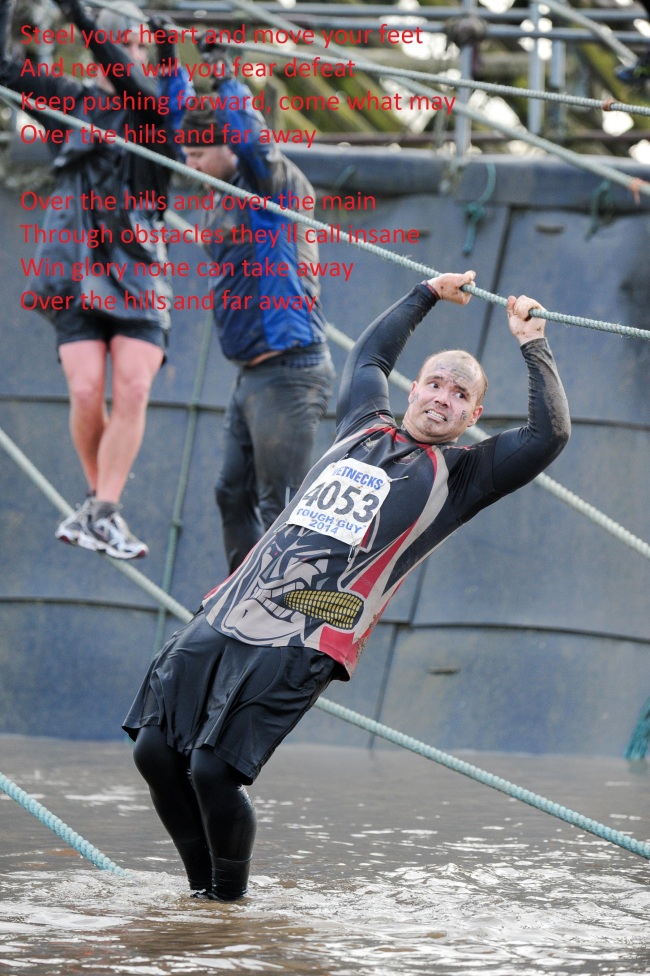