I have shot three competitions over the past few weeks, and wanted to post some notes of what these competitions are and some recommendations for anyone else wanting to try them out. 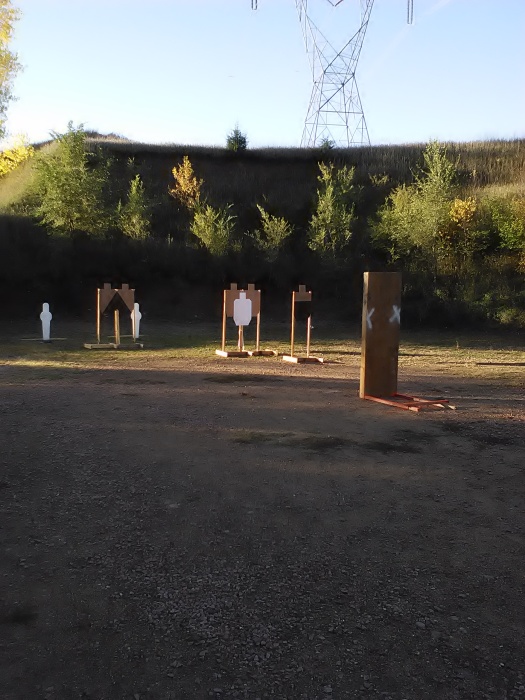 I saw that the local range in Sioux Falls has USPSA pistol matches, contacted the organizers for newbie questions, and showed up for the match. They explained the safety protocol and basic rules, and told me that the expectation for starting was to go slow, make your hits, and handle the gun safely. We would get to making it faster later.

This type of match has you shooting from odd positions, around barricades, through windows, etc., shooting a mix of paper targets (requiring 2 hits) and steel targets (that must be knocked over). The targets are also often behind obstructions, requiring you to move to get a clear shot of them.

My first stage was something of a dumpster fire. I was nervous and missing shots that I should have made, then a trigger pin popped out of my gun and the range officer stopped me. We got it back together and tried again. Nerves were less, hits were better, and the pin popped back out after about 15 rounds. At that point we declared the gun down for the day and scored the stage based on what I had gotten to.

One of the other shooters on my squad (the group that you shoot each stage with) happened to have an extra pistol in the same caliber as mine, so he let me borrow it for the rest of the match. I had a little trouble getting used to it, but overall was able to hit with it reasonably well and the match was a lot of fun.

The second match was a qualifier, meaning that stages were set up according to a standardized design rather than to the ideas of the people setting up the stage. I found these stages a little less interesting than the first match, but still fun and a good test of shooting ability. My pistol held together for this one.

Rev Tac Firearm Instruction puts on a date night event every so often, a laid-back event where you shoot pistols and rifles and have dinner, range time with your significant other and a chance to try out different types of guns. It ends with a friendly team competition of all the couples there. We shot three pistols from three different distances. Steph got us off to a solid start with the 9mm:

And I secured the win with a .500 magnum revolver referred to as “Big Sexy.”

(Perhaps not as serious a competition as USPSA, but the ones I win have to make it into the blog.)

Bring factory ammo, brass cased from a known brand. (Bulk Winchester or Remington/ UMC that you can find at Walmart is fine.) Many of your fellow shooters can loan you a spare pistol if you need it, but many of them don’t want unknown handloads or low-quality steel-cased ammo in their guns.

There will be shooters there who make the match look like a John Wick movie, already being on the other end of the stage before the steel has had time to fall. Don’t make the mistake of trying to duplicate that on your first match. He’s Keanu Reeves, you’re not, and that’s okay.  Go at your speed, make your hits, and don’t get sent home for doing something stupid.

Wear clothes that you can get dirty and bring work gloves. There will be wet paint on some targets, and at many matches everyone is expected to help set up/ tear down and to help reset targets between shooters.

Listen to your fellow shooters. They can point out little tips and tricks that can help you out.

Before and after everything else, learn from what you are doing and have fun.