I was a little apprehensive starting this event, as I hadn’t done as well as I had hoped on my last event. Found the start point, checked in with my new teammates, said hello to the Cadre, and waited for the fun to start. The start point was on a small beach, so predictably within a few minutes we were doing bottom samples in the water: 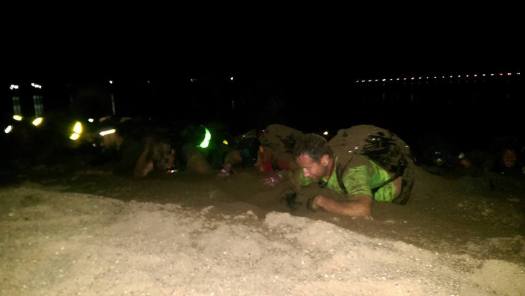 As an aside, I have to wonder what people looking on think when they see a group of adults lying at the water’s edge, pelting each other with handfuls of sand and yelling “Sand storm!”

Team leaders assigned, given a destination and a time hack, we formed up and moved out. When someone on the weights needed assistance, they called out for support and one of the rest of us would step up to take it for however long we could (although it took a little while to get everyone in step and working together.)

We fell behind pace on our first movement, and got some PT while Cadre reinforced the importance of teamwork and initiative.

The same points would be reinforced a lot that night. Take initiative, if you see something that needs done, step up and do it. Take care of your teammates when they need help. Fill in wherever you are needed. Be like water, fill, flow, and go.

We got our act together for the rest of that movement and made our time hack. New team leads, new destination, move out… and almost immediately screw up and end up stopped in the middle of a road. 5 casualties were assigned, most of them big guys who we had to team carry. Between casualties and sandbags, we didn’t have anyone to change out.

After awhile of this, Cadre had us put the casualties down and brought in several of the team who worked in medical jobs to perform triage. This person has this injury, how do you fix it, can they be moved, etc. Our medics performed well enough on this to get two or three of the casualties healed, which gave us enough people to switch out carriers and keep us moving on pace.

From this point forward in this post, I am not going to make any attempt to keep events in order. We were all pushing hard, and it tends to make my memory go a little fuzzy.

We started on paved bike trails, spent some time on railroad tracks, crossed some really cool railroad trestle bridges, covered a lot of very muddy trails through the woods, and ended up back on concrete for the end of the challenge.

Three rucks broke down during the night. One we were able to jerry-rig and get back in action, one we distributed the bricks between several people, and one ended up replaced with a handbag. More on that later.

I was continually frustrated that I seemed not to be able to carry the sandbags or casualties as far as the other members of the team, but I stepped up and helped as much as I could.

As we came to an open field Cadre told us about a time in Afghanistan when he and his unit were under heavy fire with no cover, and used team buddy rushes to get to cover. He then told us to use the same technique to get our team across the field, and how well we did this would decide how many casualties we would leave with. People with sandbags were designated “machine gun teams,” meaning yes, you have to carry that with you through the rushing drills.

About the third time through, the team on the 120 called for support, so I and another teammate went to them and took it over rather than bounding ahead. Rushing drills hauling that thing with you are a bitch. After about 2 rushes we called out for support, but no one heard us, so we did our best and carried it through to the end.

We did well enough to be given no casualties and to get a few minutes rest. At rest breaks throughout the night, Cadre would tell us stories from his deployments that brought home what he wanted to teach us. Two in particular deserve mention here:

Somewhere in Afghanistan, a US base was preparing for a coming attack. The enemy was coming with nearly every Soviet-made weapons system in use, RPKs, DShK heavy machine guns, recoilless rifles, all of it. The Battalion Commander, a Lt Colonel, was down with his men, using his bare hands to fill sandbags so that they would have enough to reinforce all the fighting positions against whatever the Taliban could throw at them. He could have simply ordered it done by his subordinates, but he chose to lead by example, doing everything he expected the men under him to do. Because no one is above teamwork.

The second story is about Cadre Cleave’s squadmate, the virgin who proved zombies are real. You can’t get that story from this post, you need to talk to Cadre at about 3 in the morning.

Several miles later, we ended up assembled in another dark open field. Cadre said that we hadn’t gotten much of a welcome party, so we were doing the deck of cards workout now.

Go through an entire deck of 54 cards, doing the number shown on the card of the exercise assigned to the suit. Spades are thrusters, hearts are 4-count flutter kicks, clubs are overhead lunges, diamonds are 8-count bodybuilders, aces are 15, face cards are 10, and jokers are a sprint with the ruck. We were given 50 minutes to make this happen.

It sucked, it sucked a lot, but we got through it. We decided to shuffle the deck, losing a little time in transitions between exercises and a little time by arguing over how to do this. Our final time was 52:30. We would not find out the significance of missing the time hack until a few hours later.

More miles rucked, stopped at a gas station to refill on water, and did the name game, where one person has to be able to name all the rest of the class. Our contender was able to name us all, we got no PT. A few minutes later, we are given new team leads, new time hack, new destination, and quickly made our way to a grassy hill next to the river.

We then repeated the deck of cards, trying to beat the previous time. We went about it in a more organized manner this time, but it still sucked. We went from the top down, cycling through the exercises in order. When we got under 10, we did two cards of each at a time (i.e. do 17 reps, knock out 9 and 8 together).

The guy whose ruck had to be replaced with a handbag probably had the worst of it, but kept going without the slightest complaint. 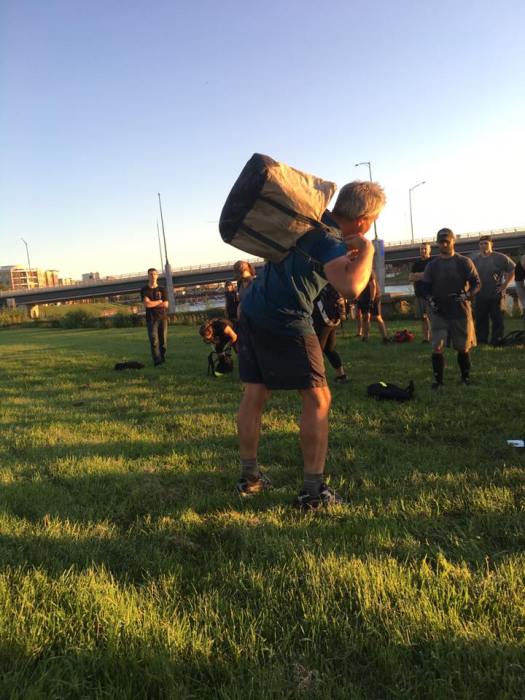 We saved the two joker sprints to the end. I did my best, but I ended up next to last, well behind the group. As I turned around on the second lap, I saw two guys coming back. They took the rucksacks from the two of us at the rear so that we could finish faster.

Cadre then called on us to step up and talk to the class about what the flag meant to each of us. I lack the command of the language to fully convey what was said, but several of them were very touching.

This (intentionally) looked very much like the prelude to getting our patches and being done, but we still had one movement left, back to the start point. We were given a tight time hack and told to treat it like a movement to contact, no lollygagging, no screwing around.

By this time we were working well as a team and we made great time. Crossing guards appeared whenever we needed to cross a street, sandbag handoffs were quick and on the move. I went under one of the heavy sandbags near the end, hoping to push through to finish with it. I couldn’t quite make it, called out for support and teammates came up to take it. The woman next to me in formation saw me wavering, grabbed my arm, and pulled me along until we hit the end point.

Time hack made, patched, time for a shower and a quick nap before the hotel wants their room back.

Showed up for the light feeling that all in all I was as ready as could be expected, fed, hydrated, got a little rest and my feet were in okay condition. Down side was we were not told to empty the sandbags after the Tough, so they would likely still be with us.

Formed up, met the new team, got instructions from Cadre, and moved out.

We stopped at a park and did  human tank tracks, basically doing front rolls while holding hands elephant-walk-style. It took us awhile to get the hang of, and I accidentally kicked the guy behind me in the head before I figured it out.

Next movement with all the sandbags and one casualty, heading to a lake with a boat ramp. I wonder what could be coming next… 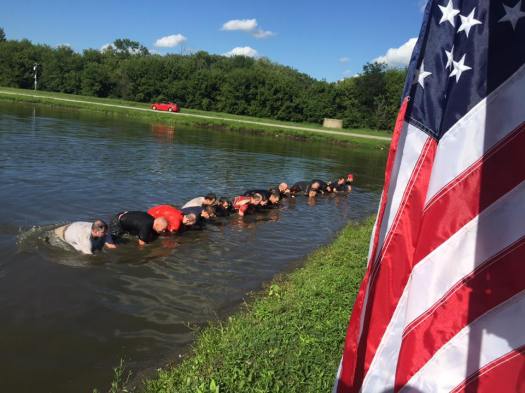 Dialog for the hydrologic survey of the duck pond:

“What is the bottom composed of?”

Roll to the left, do it again.

Movement back to the start point. I was starting to drag a bit, hesitating more than I like to admit when the call went up to take the heavy bags. Cadre critiqued us on making sure that we changed everything out at once so that we wouldn’t stop so often. We were a little behind pace, and jogged/shuffled the last half mile or so to the end point, making it right on time. 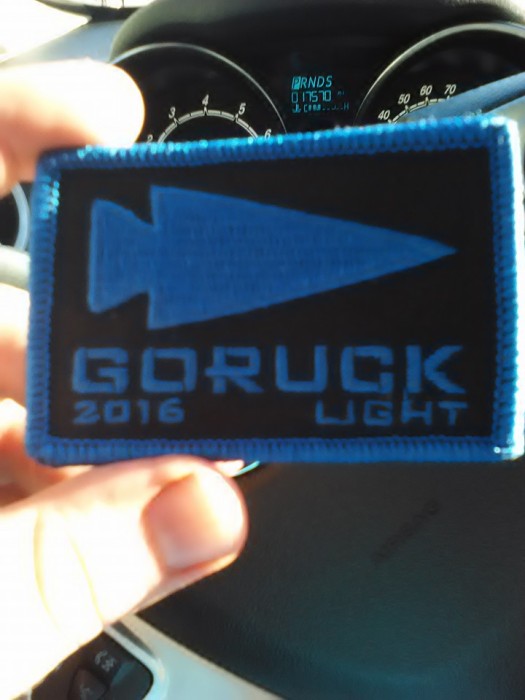 I could tell I was fading at the end, but one of the Light participants noted that he couldn’t look around the group and tell who had done the Tough, as we were putting out on par with the people who came in fresh. Maybe it didn’t show on the outside.