I came across this on one of the running groups that I am part of.

He makes a few points that I want to respond to:

Addressing each of these in turn:

It is inefficient to keep a marathon course open past 6 hours.

Fair enough. If the race director wants to shut it down then, we get that.But it is up to each RD to decide the benefits of more finishers against the costs of keeping the course open longer. If it is a marathon run alongside an ultra, then it costs literally nothing to give the marathoners more time on the course.

Couch to marathon should not exist.

Umm, why not? You start where you start and your goal is whatever distance inspires you. For longer distances, you are going to need to take your time, I would give sedentary to marathon a year or so. Why say you shouldn’t do it, when even you agree that having 5K, 10K, half mary, and 20 mile training runs would make it acceptable even to you?

This is the one that particularly bothers me, because only a few of the events that have shaped me into the person I am now would have occurred if I followed this guy’s advice. None of the marathons or ultras, GORUCKs and the SUCK almost certainly not, Spartan Beasts unlikely. Almost certainly I would not have done Tough Guy.

Some people want to take it slow and only go for events that they know they are completely ready for. Some find absolutely no motivation in that and want to push the envelope of the possible to see where the very limit of their ability is, and then try to make that limit greater. To each their own.

A slower pace does not necessarily mean an under-trained athlete. Some of us are not built like gazelles, might move at a slower pace, but can keep that pace up for hours on end. If they can find a race with a workable course limit, there is no reason they should not go for it.

If I didn’t know better, I would think its just that the title of marathoner would stroke the author’s ego a bit more if we got rid of all those 7 and 8-hour marathoners…

Runners who cannot finish in a certain time will do it once and stop running, while those running shorter distances will keep running.

There may be some runners for whom this is true, but many will find just the opposite. For many of us, doing something new that we don’t quite know if we can do holds greater enjoyment than doing the same thing again and trying to make it faster.

He also talks about how miserable a slow marathon must be. The big thing he is forgetting: the camaraderie among runners.

This is my friend Eric with two friends that helped pace him through a marathon, exchanging silly jokes every step of the way.

Another friend, Jaime, signed up for the longest distance she thought she had any chance at completing, and finished after the finish line had been taken down. This is the welcome that the GOATz (the local running club) had for her when she finished: 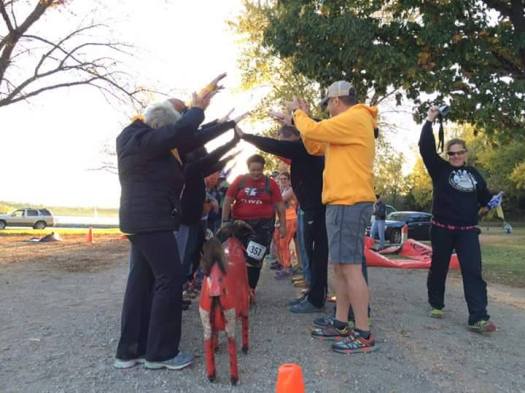 This is the kind of thing that keeps many of us running. And often it is only found well outside of your comfort zone.

An 8-hour marathon is bulls*** and should not exist.

Really, dude? You are going to casually dismiss the efforts of so many who have trained like hell and given their all? You are proving a lot of negative stereotypes true, and the rest of us would like it if you stopped that.

Then again, spreading some manure on the fields makes everything grow better, just like slow marathons have helped many athletes grow into something better, so perhaps the metaphor works.