I like to start each year by signing up for a new, big, crazy, scary challenge later in the year. It pushes me to grow, to get better, and to find yet crazier challenges for next year. When I found a local 100 mile race, I knew I had found this year’s challenge. My friend and co-conspirator Schmitty signed up to do it with me, saying friends don’t let friends do stoopid sh*t…alone. A few more friends signed up for the 50 mile option.

Training went okay, but not as well as I had hoped. Race day came, we assembled at the start line in the dark, were given a short overview of trail conditions, and we were off. 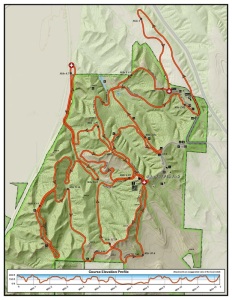 We started with an out-and back up and down some steep switchbacks, then proceeded onto the main loop. The website had mentioned steep, hilly trails, but I was unprepared for exactly how steep it was. Due to recent snow melt, some areas were also exceptionally slick and muddy. (Most of the trails had descent footing, but there were a few hills where I literally slid 75 feet on my butt.)

I tried to keep a steady pace on flats and a hard march on uphills, and except for a few places with tricky footing I was able to. Somewhere around Mile 4 I caught up with Schmitty. He had rolled an ankle and was walking with a limp. I stopped and gave him some ibuprofen and continued on. About Mile 9, he caught back up with me.

“Yeah, I stopped at the aide station to decide if I should just walk back, or have them give me a ride out, and I heard a familiar voice in the back of my head telling me to get the f*ck up…”

We finished the first lap right on pace to finish the 100 in 32 hours. I stopped in to take care of my feet and Schmitty saw the medic about his ankle. The volunteers/staff at this race were way beyond what I expected. All previous races that I have done, supplies were there and you had to go get them. Here, they would come to you and ask what they could do for you. Refill your pack, grab something for you while you are tending your feet, help you tape hot spots or blisters, whatever it took to get you back out there faster. Many of the volunteers were experienced ultra runners themselves, so there was a lot to be learned from their suggestions, from what blister-prevention techniques are best to what foods would be best to take and eat on the next leg of the trail.

By the end of the second lap, the hills were starting to wear me down, and Schmitty’s ankle had gone beyond what OTC meds can fix. I finished the lap about an hour behind schedule, and he dropped at Mile 25. (I told him that 21 miles on one working ankle was an impressive achievement regardless.)

I got a little too inside my head for the first part of the third lap, spent too much time walking and worrying about how far behind pace I was. I got my head back on straight by the last aide station, but by that time my knees were starting to go.

I was confused what was happening for awhile, as I had not had this type of knee pain before. My best guess is that, having not trained on hills anywhere near this steep, the angle between the ground and my upright body was more than my ankles could flex to, and my knees were stretching themselves apart trying to take up the slack.

I sat down for a bit at mile 37.5. I cannot tell you how much I did not want to go back out there. But one more lap gets a 50M medal, all the volunteers were encouraging me on, and I have 20 more hours to get it done in…

What one of the volunteers said sticks with me. “Is it just pain, or is it damage? If it is just pain, push through it, just think about getting to the next aide station. If it is damage, then we see how bad it is and go from there.” 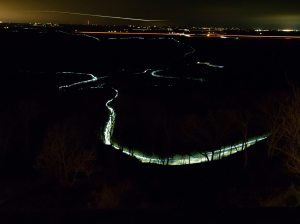 By this time it was dark and the 50 milers were out on the course. Something about night running is always a bit surreal for me, the limited sight, the noises in the dark, deer flushing around me as I kept running. The view of the surrounding city skylines from the high points of the course were also quite beautiful.

My knees were in terrible shape, and I was having to stop for a few breaths during even moderate uphills. I grunted it through the last few miles, sharing encouragements with the 50 milers as they passed me, and made it back to the start point at somewhere between 23 and 24 hours. The staff encouraged me to push on, but at this point I knew I was rapidly approaching the point where pain crosses over to damage. They marked me down for a drop to 50, gave me the 50M medal, and encouraged me to make sure I got the full 100 miles worth of food. 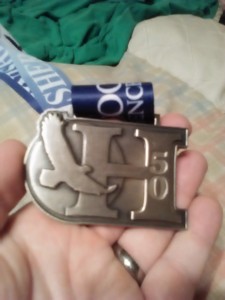 Not what I had wanted, but still more distance (and dear Lord more vertical distance) than I have ever done before. Much learned from volunteers and fellow racers that will help keep my feet and body going, and much learned from the trails about how I need to train differently.

A few days off, back to training, and this course will see me again.