The Vermont Ultra Beast. The most badass challenge in all of obstacle racing. One of the goals I had set my mind on as soon as I crossed my first finish line and started wondering how far I could take this. And a goal that still remains unachieved.

Showed up at OMG dark thirty to drop off drop bins, warm up, say hello to other racers, and realize exactly how far I have roamed this year. “Hey, I know you from Quebec City.” “Haven’t seen you since Tampa, how have you been?” Stumble through the dark to the starting line, listen to a few mind games about needing a 13″ piece of string (you didn’t). I admit that I had more butterflies in the stomach than usual which I think shows in this photo:

Started off with the typical uphill and downhill and first few basic obstacles, short walls and over-under-throughs. Steep rocky trails, finding out that I came a little overdressed and stopping to take off my thermal, to the first sandbag carry (the easy one by comparison, as I would soon find out.)

I hit the first bucket carry still reasonably on pace, but I soon after started falling short. There are a lot of reasons, ways that I will do it differently next time, but the long and short of it is that I did not deliver as much as I needed to.

The Vermont Beast is known for the Tarzan Swing water obstacle, which I knew would take me longer than the required number of burpees, so I burpeed out and went around. Next was wading back through the pond, just to make sure no one skipped this obstacle in hopes of staying dry. Footing was actually better a few feet out, you get wetter but move faster.

More muddy wooded trails with ungodly uphills, the Atlas Carry (they are getting heavier, but still one of my most reliable obstacles) and a low crawl made more fun by creative volunteers. Whenever anyone became caught in the wire, one of them would become a caricature of the old man driving children off his lawn, yelling and throwing mud at us “young whippersnappers”. It delivered a laugh when we all really needed it.

Next was the log carry, brutal uphill but much nicer on the return slope. At some point during this, my feet slipped and as I shifted to keep the log under control, something in my back twisted. I barely noticed it at the time, but it would make itself known a few miles later. 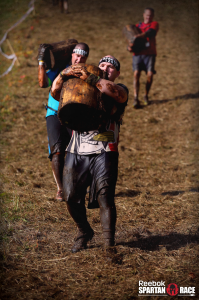 The stump jump obstacle was made tougher by adding a horizontal log that had to be walked across in the center. A fellow racer was kind enough to spot me and I made it through.

More walls, more hills, over a vertical cargo net, and yet more hills. For a flatlander like myself, any obstacle you can put in front of me is preferable to endless vertical terrain, simply because it is so difficult to train for when you don’t have anything that duplicates it.

About this time, as I stopped among the steep, muddy, single track trails to stretch my back and risk overdosing on ibuprofin, I realized that I was not going to make even the first time cutoff. No way in hell am I leaving the course, so I put my wristband (the mark that identified me as an ultra) in my camelback and continued on to get at least one lap done. (Before the comments start, I am aware of the rules against this, but I am also aware that these rules are more on paper than in fact, as most of the volunteers on the course encouraged those who missed the first time cuttoff to downgrade from the Ultra to the Beast.)

The next obstacle of note was likely the high point of the race for me: I approached the spear throw, thinking that it is usually just a formality before you go do burpees. My stunned surprise at seeing the spear stick morphed instantly into a running victory dance, high-fiving the volunteers as I went by.

About this time I caught up with one of my roommates for the trip, who had started out 10 minutes ahead of me and who was having about as good a run today as I was. We teamed up from that point on, at first unintentionally and later stayed together on purpose.

We picked up a few other would-be ultra-beasters downgraded to the beast, what one of us described as “Club Onesie”. As we continued on and helped each other through, that became Team Onesie.

Spartan’s usual method is to use twisting trails, so that you think you are approaching the top, but when you get there its not the top. As I came out of the trees and looked where the path lead, I realized that had actually been a kindness. Actually seeing the uphill in front of me, that many racers came to call the “death march”, was so much worse than the constant thinking you were “almost” to the top. Damn that was a brutal climb, I am told 994 feet up in .7 miles.

It is also a bit of a mind game, for a flat lander, that you can see obstacles in a clearing well above you, and can only think, “Okay, I guess we’re going all the way up there… again.” I remember seeing the tire pull from far below, and thinking “WOOHOO we made it” when we finally got there.

Next was what was basically agreed to be the toughest obstacle ever, the most grueling sandbag carry I have ever seen, heard or thought about. 60 pounds carried up and down the side of a mountain for a little under half a mile. Here is the view from the top:

When I finally got mine to the top, I looked down and saw one of the group having trouble lifting hers. There was nothing else to do: I left mine at the top, got hers the rest of the way to the top and gave it back to her there. That last 100 yards, carrying the second bag to the top, may have been one of the hardest pushes I have ever done.

We regrouped at the water station after the carry, laughed about how people who had just met me today were willing to accept unmarked items from my pack (Reeses Pieces and ibuprofen, never leave home without them) and moved on to the next obstacle. I was familiar with the Rig from Canadian races, but this was the first time any of the others had seen it. As I approached I saw a runner ahead of me fall and not immediately move, so I ran ahead to check on him. He turned out to be okay and we piggybacked each other through the rig.

We had formed into a solid team by the time we hit the last high wall, so much so that we were calling others who were going to skip the obstacle back with, “Dude, I have gotten 50 year old women over this wall, we can get you over it.” And we did.

We then came to a pipe on a chain that had to be traversed hand-over-hand. It was too high over the water below to put people on shoulders, but one of the team suggested knees on shoulders would put us at about the right height, which worked so well that we likely spent 10 minutes helping other racers get through it. I LOVE teamwork in action.

The last climb was a difficult, nasty climb with lots of logs across the path, but when we reached the top we could see the finish line. We regrouped, made sure all of Team Onesie was accounted for, and all charged the finish line together.

High fives, finisher’s medals, recovering our drop bins and changing into dry clothes, and then waiting for news of teammates still on the course. Many would be pulled from the course later, some agonizingly close to the cutoff. A very few, very badass people made it. And as we sat in the dark, watching the somewhat surreal lines of headlamps coming down the mountain, I started planning out my next attempt. 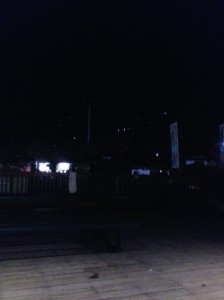 I overestimated myself and underestimated Mount Killington this year, and I doubt I will be ready to take on the Ultra again next year. So, Vermont Beast both days next year. And the fuzzy green armband that I hid halfway through the course… It will be on my arm every workout until my return.