After competing my first Trifecta last year at Mont St. Marie, I knew I wanted another match against the mountain. I got it in my head to do a Canadian Trifecta this year, and Spartan decided to put the Super and Beast on consecutive days, awesome training for the UB.

Note: I did not get to writing this post as soon after the event as I usually do, so the points made here will be those that stick out in my mind as I look back on it.

The start of the race was typical: rough trails that seemed always to be headed uphill, wall clearing, back down the hill to the rope climb (which I failed) and back up the hill, crossing the barbed wire crawl halfway up.

At the top of the hill was the 8′ wall, which I completed unassisted (although the course marshall did call me out for “Moderate use of the red blocks”). Back down to the Hoist and something I had never seen before:

A turning monkey-bar contraption that you had to turn for 10 bars or do burpees. I cut a deal for 2 bars and 24 burpees. Whoever designed this contraption is truly an evil genius.

Back up the hill. Again. What is it with this “up” stuff?

At the top of the hills were the monkey bars, which I was able to get a fellow racer to spot me through.

Onward through steep trails, stopping in to check on those who had not brought food or water with them and were starting to flag. I commented to one of them, as I shared my M&Ms, that this is about the only place where you can take candy from strangers.

At one of the walls, a pair of ladies were unable to get over and the course marshal was sending them to the side to do burpees. I ran up and helped them over, one of them inadvertently kicking me in the head as she went to get a leg over. She was mortified, but I was laughing about it.

Mountain races have the ability to take a lot out of you, and I am no exception to this point. I made it over the reverse wall on my second attempt, looked forward, and saw the jerry can carry sending us back up the mountain, and stammered out, “Are you F***ing Sh**ing me??!!”

I took a moment, drank, ate, shared with those behind me who were having the same reaction, then STFU’d and went after the jerry cans, Nasty carry, had to stop four or five times on the way up, but was able to do the downhill in one shot.

A couple more obstacles, running some creek bottoms, and suddenly coming out of the brush to see the end:

Back to the hotel to rest up and fuel up. Super complete.

We had been told that the Beast course was the same as the super course, with a flat 5k added on to the end. As lies go, there are lies, there are damned lies, and then there is everything we would be told about this course.

The first half was indeed the same as the day before, except for the bonus of teammates at hand. The spinning monkey-bar thing is much easier when teammates are holding you up.

The course changing was almost unnoticed until someone pointed out that we had not gone as much straight uphill the day before. That was a brutal climb, 2 miles of nearly straight up, ending in the atlas carry.

The second half of that race had some interesting touches. Low crawls under barbed wire, in a stream about 3 feet deep. Tractor pull through the edge of a pond. (Also awesome that we hit that just as the rain did.)

We all hit a point of this is stupid, this is STUPID stupid, this is not fun anymore, why the hell are we doing this. I encouraged my teammates (and myself) along by saying that if things are still fun, you are not growing. You have to push through when it is really not fun anymore if you want to become tougher.

We got to the Rig, the signature Canadian obstacle, and decided that we were not, under any circumstances, doing burpees here. We would put one teammate on the others shoulders and carry them through the obstacle, with them just touching the bars/rings/ropes that we were supposed to be hanging from. Ring the bell at the end, put them down, do it again for the next. Screw burpees.

The first half of the team reached the end. Two of us helped a teammate with an injured wrist up the slick wall…

And onward to glory! 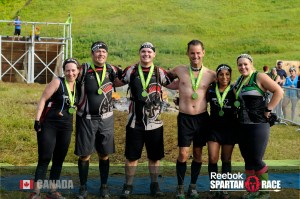 We waited for the second half of the team, and we saw them when they reached the spear throw. I ran back to encourage them, and one of them mentioned she was unsure about making it up the slick wall, so I jumped back in to run the last stretch home with them, donating burpees to their penalties, and getting some odd looks of “You have the finisher’s medal, why are you back here again?”

My first double Trifecta, and my first Canadian Trifecta. And while I it’s debatable if I “won” my rematch against the mountain, I pushed harder than I was capable of last year, harder than I thought I could push now.A huge win in my book.

2 thoughts on “Back to Back: Ottawa Spartan Super and Beast 2014”