Obstacle racers accept that not everyone will understand us. Not a big deal, some like weight lifting, some like road racing, some like step aerobics. We like what we like, and everyone can do as they please.
That being said, we dislike the utter contempt for our sport that comes from many non-athletes and a very few athletes from other sports. If its not your thing, fine, but don’t talk down to us for the sort of challenges that push us to be better.
The most contempt comes from those who know the least of the sport. It is usually ignorable, but when an organisation as prestigious as the Boston Globe chooses to publish an article that looks down on us and is obviously written by someone who knows little of the sport, I feel the need to respond. (http://www.bostonglobe.com/opinion/2014/06/29/tough-mudder-and-spartan-races-masochism-goes-mainstream/ly4EaJGCWRvXg92T3YqtdM/story.html)

So, here is the body of the article with my comments.

FOR ANYONE worrying that China is going to take over after we’ve all eaten ourselves into oblivion and blown the defense budget in what remains of Iraq, there is hope. Unbeknownst to the couch-ridden masses, America has a powerful core, a national equivalent of SEAL Team 6. It is strong, it is invincible, it is the Terminator, the offensive line of the Patriots, and the surliest toll collector on the Mass. Pike rolled into one. It is the hard underbelly of the fitness elite: those who engage in extreme athletic competitions like Tough Mudder and Spartan Race.

Anyone who does anything that I consider out of my comfort zone must be a superhuman cyborg. Makes perfect sense.

So you ran the Boston Marathon in under three hours? Meh, these men and women say. There was no barbed wire to crawl under, no flaming pit to jump over; you just ran down a city street, bathed in admiration. What’s the challenge in that? Where’s the electro-shock treatment? What, no 3,000-foot ascent? Slacker.

I have NEVER seen any obstacle racer look down on those who do well in other pursuits. Many of us ARE marathoners in addition to everything else we do.

The rise of extreme obstacle racing — Tough Mudder and Spartan each expect an estimated 1 million participants this year — is a welcome aberration in a nation that appears doomed to expire of abdominal flab. A predictable extension of the running boom, it gestated at the finish lines of marathons and 10Ks. The weekend warriors cried, “Now what?”

Okay, I am going to ignore the weekend warrior comment because I cannot respond to it politely. Many of us started with OCR and then moved into marathons and 10Ks, along with the more flamboyant challenges that the author does not even know about. This is not a been-there-done-that mentality. It is a sport of athletes who love testing every possible weakness of their physical and mental fitness.

When Harvard Business School grad Will Dean, the Mark Zuckerberg of the fitness industry, envisioned Tough Mudder, he understood not just viral marketing but the philosophy of William James: “The strenuous life tastes better.” Not much is strenuous about modern life, and when primal urges go unmet in the urban savanna, a vital thing withers. For a people to function, loins must be girded. Extreme competitors get this.

Not everyone wants to stop their fitness journey at 30 minutes a day on the elliptical. And this is a problem why?

From a distance, the phenomenon invites ridicule. Consider the Tough Mudder tribe, whose idea of a rollicking good time is an all-night relay carrying 40 pounds of bricks, a plunge into ice called an “Arctic Enema,” and a slide that deposits the competitor in licking flames, a human grill called “Fire in Your Hole.” For all this, the Tough Mudders who endure receive orange headbands that evoke a certain ’80s movie, “Flashdance,” and its attendant song, “Maniac.” Seems fitting.

Meanwhile, over at any Spartan Race, or its predecessor, the impressibly merry Death Race, participants sign waivers that suggest their extinction is imminent. The founder, Joe De Sena of Vermont, begins his new book “Spartan Up!” by describing a nearly fatal 350-mile race in Quebec — in mid-winter. What fun!

“Invites ridicule”? Facing fears, pushing through your limitations, learning what you are actually capable of, is now worthy of ridicule? And if you want to make fun of the headband, I get to go through your closet and see what fashion faux pas I can find.

Milder, but also non-traditionally challenging, is the new series of mountain races begun by four friends that include former US Senate candidate Gabriel Gomez. Hingham-based O2X will hold its inaugural race, with “natural” obstacles,in September at Sugarbush Mountain in Vermont. The rigorous ascent, “a cross between obstacle-course racing and trail running,” might deplete the body but will mercifully leave the mountains intact, co-founder Craig Coffey told me. “We will leave the mountain better than when we found it,” Gomez said. Presumably, too, the competitors’ resolve and physiques.

Finally! A paragraph with no blatant disdain!!!

Three of the four 02X founders were Navy SEALS — not surprising, as a hard streak of green-and-brown camouflage runs through extreme athletic endeavors. On the Spartan blog, De Sena says some of the events were designed by the US military. When an Army recruit crawls though mud under barbed wire, however, he is preparing for an experience that might actually transpire. When an investment banker does the same, wearing an orange headband, what is the point, beyond ensuring that masochism becomes mainstream?

Yes, no one ever really needs to be strong in this world. No one will ever have to crawl under the wreckage of a car crash to free a trapped child. No one will ever have to jump over a fence to get to a phone and call 911 in an emergency, because cell phones are always charged and work everywhere. Nothing that is practiced by the military has anything in it that may be of use to civilians. The whole thing is just silly.

De Sena explains it as a change in perspective: “I believe that confronting these insane obstacles is the best way to rewire a human brain after years or even decades of coddling, predictability, and excuses,” he writes.

If, of course, your brain is not fried on the course, or worse. Injuries in extreme races have included electric shocks, broken bones, a stroke, and four deaths. A lawsuit was filed on the most recent, a 2013 drowning in West Virginia, but so far, no race organizer has been held culpable in any fatality. I note, however, that the once vaunted Web address of the Death Race, www.youmaydie.com, now redirects to a comparably benignwww.peak.com/death-races.

We will ignore a very good point from the Spartan Race founder, and go straight into, “You’ll shoot your eye out with that thing, kid!” We will also ignore the injury rates among mainstream sports that cause much more damage to the body than OCR.

That people find events like the Spartan race attractive — and will pay upwards of $100 to enter — seems odd, given that the number of young people who find military life attractive has dropped over the past 10 years, from 63 percent to 40 in one study. Maybe our inner GI Joes get all the adrenaline they need in a weekend race with no threat of an extended stay in Baghdad.

Again, no one in civilian life has any use for any of this stuff. Now go back to your recliner and watch some TV. Its the American way.

There is, however, a certain comfort that can be derived from knowing that the Tough Mudders and the Spartans exist. They are the new American militias, unarmed but for their extraordinary triceps.

Yes, everyone who can do this is a huge, muscle-bound Viking Berserker. To prove this point, I asked several of my teammates for photos to use in this post. 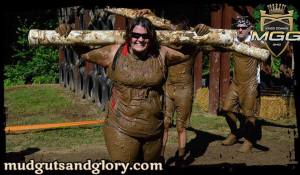 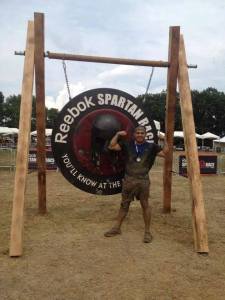 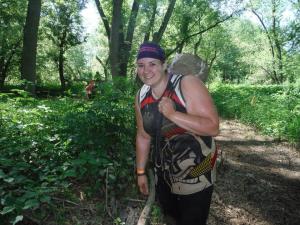 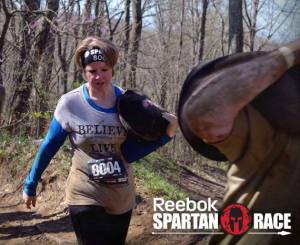 Obstacle racers are all sizes, all shapes, all ability levels. We are not some strange group living far away.