I was excited to try this mud run, as they are advertised as having bigger and tougher obstacles than anything else in the Midwest. I was expecting an epic Darby Queen type of setup, something that you step into the starting corral and have this reaction: 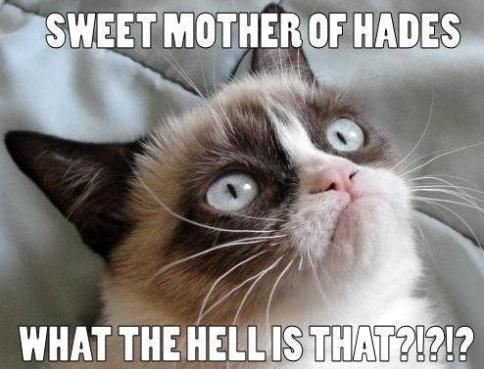 I would end up being a little disappointed with the obstacles, but the humor among the other racers made up for it, and it turned out to be a very fun, if not all that challenging, experience.

When I got to the starting corral, only a few of the obstacles were visible. Most of the crowd were  locals (I was among the top 10 furthest from home at this run) and about half were at their first-ever mud run. Most were complaining about the cold (it was about 40 degrees F, but I guess that is cold for the Kansas City area). There had been 2″ of rain the night before, so the entire course was waterlogged. The emcee alerted us to stay near other runners as some creek banks could not be cleared by a single person. (In point of fact they all could be, easily.) We went through the starting ceremony, which involved rubbing mud on our faces to get in the spirit and reciting, “I will be cold. I will be wet. I will be pissed off that I came here.” He yelled ready, set, go and we were off… and immediately came to a bottleneck as the leading starters had difficulty running in the mud. We soon increased to a trot, and almost immediately started trading banter with those next to us.

Woman next to me:”Oh, I got splashed with cold water, and we are going to have to go through that!”

Me: “Don’t worry. There are lots of people ahead of us. The water will be warm by the time we get there.”

Course official at cargo net climb: “Hey, this is a no-hands obstacle!”

Me: “Oh. okay!” I start wrapping my forearms through the net to climb without my hands.

Most of the obstacles were built-up hills of thick mud, trenches filled with waist-deep water, and going up and down creek bottoms. There were also 7′ walls to go over, a cargo net, weavers, but none of them very tough. For example, the bottom of the rope traverse was a steel cable kept very taut, so it was very stable and much easier than that sort of obstacle should be. My favorite part of obstacle racing, the universal teamwork among people who don’t even know each other’s names, was less pronounced here, mainly because it was less necessary. I helped those around me when needed, but it usually wasn’t called for.

There were three obstacles that deserve mention. The first is a series of telephone poles in a water pit that you have the choice of going over or under.

The common high-knee tire path is not noteworthy in itself, but the fact that they had 200 yards of it non-stop was cool. 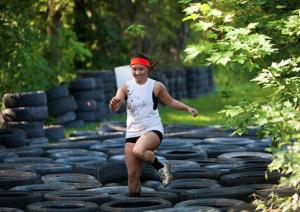 The last obstacle is known as “the Gauntlet”. There are 5 paths that you must choose between, ranging from slightly difficult to OMG WTF gnarly evil. The easiest is a balance beam that has various items along it that you have to go over or through. the more difficult ones have different items that must be crossed wall-traverse or monkey-bar style, including steel I-beams, a section of chain-link fence, and tires suspended by ropes. I ended up in the easiest line, may try the others later. 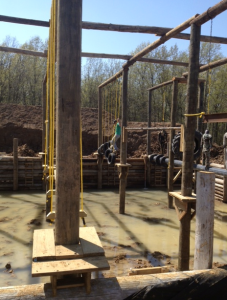 I skipped 2 obstacles for safety reasons, where you have to go down a slide or jump off a platform into 12′ deep water. I am a weak swimmer, and not being in control of entering the water is a problem that I have not yet corrected.

The cool thing that I noticed this race is that the two sides of my training (OCR racing and martial arts) are coming together, and I find myself using Bujinkan movements on the course. At one of the creek banks there was a rope to help us climb up, and the last step over the top often causes peoples’ balance to go wonky. I dove forward into a front roll and kept enough momentum to send me off running. (I also realized that if a muddy section is just a touch too far to jump over, rolling across it causes you to sink less than walking across it, and you can come out of it easier.) Later, helping someone out of one of the water pits, I sat down, grabbed his hand, and laid back to use my core to pull him up, then went into a back roll.

I was disappointed with a few things about this race. (Using a race bib that won’t survive the course as a timing chip and beer ticket is a dumb idea.) But it also had some very nice points (warm showers and really nice race shirts). If you go into it expecting a glorified Warrior Dash, you will have a good time.

Things that I will learn from this:

Always ink your bib number on your forehead, even at races that don’t do that. It will make things easier at the gear check. We had to locate my bag by calling the cell phone that was in it.